Share0
Pin0
Tweet0
Share0
Tweet0
Share0
table of contents
1
Bull Shark Diving - the No. 1 diving experience! Deep in the blue waters of the Caribbean surrounded by majestic predators
2
Why you only can do bull sharks diving in winter
2.1
The unsolved mystery of shark migration
2.2
Dropping water temperature
2.3
Only female, pregnant sharks
3
How dangerous is bull shark diving?
3.1
How dangerous are sharks in general?
3.2
How shark attacks happen
3.3
Shark attacks on scuba divers
3.4
Shark attacks in Playa del Carmen
4
Why Bull Sharks are so fascinating
4.1
Anatomy of Bull Sharks
4.2
Skeleton
5
Skin
6
Teeth
7
Fins
7.1
Perfect predator
8
What is different about Bull Shark Diving
8.1
Special safety procedures for bull shark diving
8.2
Why you should only dive with a professional guide
9
Feeding vs observation diving
9.1
Pros of feeding
9.2
Cons of feeding
9.3
Pros of observation
9.4
Cons of observation
9.5
Conclusion
10
Shark conservation
10.1
Value of a shark - dead or alive
10.2
Sharks and a healthy marine ecosystem
10.3
Saving our Sharks
11
Do you want to go for a shark dive?

Bull Shark Diving - the No. 1 diving experience! Deep in the blue waters of the Caribbean surrounded by majestic predators

You love scuba diving and especially diving with sharks? Then you must have heard about Bull Shark Diving in Playa del Carmen.

A group of female bull sharks visits during winter the coast of this Mexican city in the state of Quintana Roo.

Local Dive shops use the opportunity to offer guided scuba dives with sharks. Some attract them by feeding and promise "adrenaline rush". But most offer observation dives. That is the best way to experience these massive sharks in a calm and more natural mood.

In this article you can find out how dangerous shark diving really is, how shark diving works, the pros and cons of bull shark diving including feeding and more! 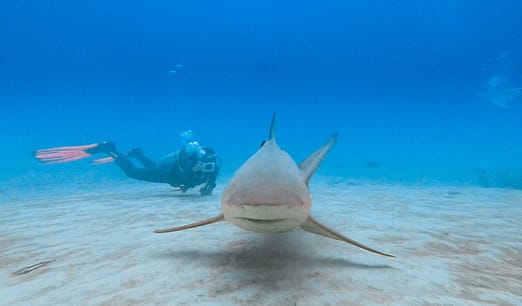 Why you only can do bull sharks diving in winter

The unsolved mystery of shark migration

Bull shark diving is only offered during winter. For a very good reason: The bull sharks arrive during November and leave around March. But why?

It seems that the bull sharks follow their prey. At the same time the Greater Amberjacks are present in Playa del Carmen, a proper shark meal.

Although the bull sharks remain in the area when the jacks migrate.

Scientists still don´t known where the sharks come from nor where they go, but year after year they return. Up to 24 individuals in a size range from 1.20m to 2.50m are joining the divers.

Most astonishing all individuals are female and most of them are pregnant. During January they leave Playa del Carmen for a few days to visit their nursery and give birth. Also the position of the nursery is unknown.

How dangerous is bull shark diving?

Many myths are spreading about the mindless killer of the oceans. Movies like "Jaws", which are pure fiction, created an irrational fear and panic of these beautiful animals.

How dangerous are sharks in general?

let´s do a fact check. The best way to figure out how dangerous sharks are is to have a look at statistics.

Do you like dogs? Everybody likes dogs. But some breeds are big and can be dangerous if you don´t know how to handle them: In 2019 only in the USA 48 dog attacks ended lethal (source www.dogsbite.org).

Compared to that only around 3000 shark attacks on humans have been recorded in total since the year 1580! Not even 500 of them lethal (source International Shark Attack File).

The most likely way to get involved unlucky with a shark are recreational surface activities like surfing or bodyboarding (544 cases from 2010-19). Second in the list is swimming and bathing, also at the surface (178 cases from 2010-19). Next is diving with just 24 cases in the same period.

And so far we are talking about all attacks, including non-lethal.

As mentioned before only very few attacks occur on scuba divers. A reason might be that surfers or swimmers might give the impression of a shark´s common prey.

The noisy bubbles exhaled by scuba divers and the uncommon more vertical position fits less into their scheme of prey.

Good news: So far there have been no recorded shark attacks in Paya del Carmen - ever! Have a look at sharkattackdata.com

Is shark diving 100% safe? No, definitely not, but the risk is much lower compared to many other activities we do every day without thinking about the risk.

Why Bull Sharks are so fascinating

Majestic, elegant, powerful are some of the words to describe the appearance of a big shark. But also his hidden abilities like his senses are very fascinating

Sharks have adapted perfectly to their environment over hundreds of million years evolution.

Sharks have a cartilage skeleton. Compared to bone it is much more flexible and lighter but strong and durable. That helps a shark to safe energy for moving. Also the flexibility is an advantage for tight and quick turns.

Shark teeth are made of enamel which makes them strong. They grow in several rows that are replaced approximately every 2 weeks.

Sharks have a large dorsal fin and mostly a smaller one further back towards their tail. Those provide balance and stability. Sharks use their pectoral fins to steer and lift themselves in the water. Their tail fin finally gives the propulsion.

Sharks have the same 5 senses as humans but can also sense electrical currents and pressure changes.

Bull sharks are one of the very few shark species that are able to survive in salt- and fresh water. Their nurseries are at lagoons and river entrances. The juveniles are protected there from large predators until they are grown up.

What is different about Bull Shark Diving

Shark diving demands additional considerations to a common reef dive. To minimize the risk of provoking the sharks all divers must follow strict rules.

One of the most important rules for shark diving is to stay close to your group. Sharks tend to attack divers in a "school" less. Also one diver should always monitor the back of the group: Bull sharks love to sneak up from behind.

Descend and ascend should be as short as possible. If sharks are around a diver should stay close to the bottom.

Artificial light for cameras can provoke sharks to have a test bite, so can long extensions for lights and cameras.

Attempts to attract sharks like squeezing a plastic bottle are strictly forbidden.

Your guide will tell you for sure some more details in his briefing.

Why you should only dive with a professional guide

Like big dogs or horses, sharks can become dangerous if you don´t know how to handle them. That means mainly read their behavior to avoid provocation and understand when it´s time to go.

It takes experience to guide a group of divers safe through a group of adult bull sharks. While you are amazed by the show in front of you someone has to watch your back.

A frequent discussion in shark diving is about the ethics of shark feeding.

Shark feeding can be done with cages that protect the diver from attacks. This is mainly used for diving with Great White Sharks.

The other option is that a feeder protected by a chain suit baits sharks with dead fish. He feeds them from a metal stick. The guests are lying in a few meter distance flat on the seabed, protected by a safety diver.

Supporters of feeding mainly enjoy the adrenaline show. Nevertheless there is another argument for feeding: Frequent feeding keeps sharks more stationary and offers a more reliable attraction for tourists. The more shark dives sold, the higher is the value of a shark. That helps to protect the species because more people make profit with them than just fishermen.

Opponents of shark feeding argument that bait is altering the behavior of sharks. They might get used to receive food from humans and become aggressive if a diver has nothing to offer. Also establishing a general connection between humans and food might not be helpful in avoiding accidents.

A shark feeding show increases the risk of an accidental test bite because the sharks are in feeding mode, hence less careful.

Experiencing a shark in its natural habitat acting normal is definitely the way of shark diving with the smallest impact on nature. The difference in their behavior compared to a feeding show is obvious: In calm, smooth movements they circle relaxed around the divers and examine them curious but respectful.

A small, negative aspect of observation shark dives is that it happen more often that you will see no sharks - the ocean is not a zoo. Feeding increases the likeliness to see sharks in the exact moment you wish.

Another argument is that especially in the case of Playa del Carmen there would be no shark observation for recreational divers without feeding.

The first local divers that explored the shark population had to go as deep as 50m to see them. Only because someone decided to lure them into more shallow water they are now also accessible for most of recreational divers.

Bull Shark diving in Playa del Carmen has found a way to become a first step in sustainable exploration of nature for tourism. The fact that a majority of dive operations is focusing on observation avoids an over-feeding. All participants win. In addition a shark conservation movement invented a program to pay local fishermen not to use their shark fishing rights.

Are you ready for a bull shark dive?

More than 300 shark species are listed as highly endangered. Main reason is overfishing and destruction of natural habitats important for reproduction like Mangrove forests.

Value of a shark - dead or alive

The example of Playa del Carmen and other fishermen villages show that the value of a living shark is so much higher compared to a dead one that it even makes sense to pay fishermen to stay at home.

The next step is to get fishermen involved in protecting their natural resources and to establish a sustainable way to use them.

Sharks and a healthy marine ecosystem

The organization which structured bull shark diving activities in Playa del Carmen and negotiated the agreement with local fishermen is saving our sharks. They are not only offering environmental education events in schools but also participating in a large project to monitor the migration patterns of "their" bull sharks.

Do you want to go for a shark dive?

Check out the observation dive offers from Frogman Diving Cancun

Cenotes, entrance to the Mayan underworld and the largest underwater cave system in the world

Cenotes, entrance to the Mayan underworld and the largest underwater cave system in the world

If you like to get updated about my upcoming free online course to improve your air consumption or new blog posts and special offers,

Please log in again. The login page will open in a new tab. After logging in you can close it and return to this page.