Read my story and find out how you can help us 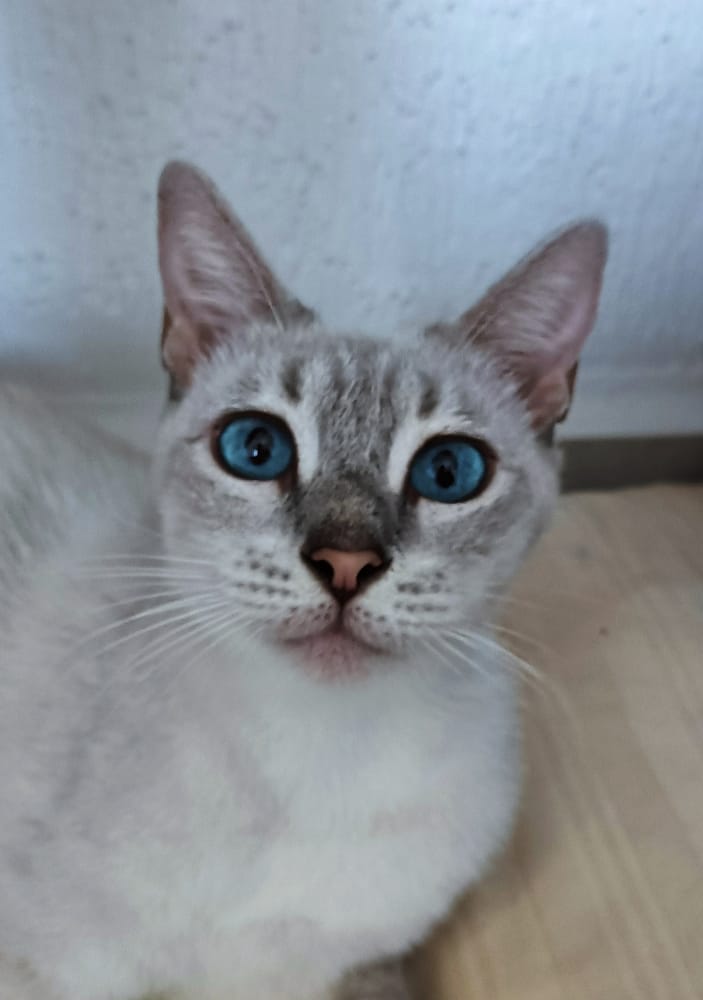 I got abandoned twice. It is not clear who my first family was. One day I appeared in Cancun around a car wash that at night is a taqueria. The nice Taco people gave me food and water at night, the people of the car wash threw rocks at me and kicked me. After a month someone picked me up and gave me a home. But only for a short time, they realized that I was pregnant.

After only 4 weeks, the Taco people saw a car go by throwing a garbage bag out of the window. The trash bag was moving, so the Taco people looked and found me inside, terrified. I was running away, hiding during the day and at night I came to beg for food.

Someone reported someone who knew someone who could help. Two people showed up at the taco shop at night, saw me, gave me something to eat, and put me in a cage. One of them took me to his house, gave me a room, a toilet, some nice cardboard boxes where I could hide and sleep, and all the food I could eat.

He was kind, he looked at me every day a couple of times, he helped me clean my fur. I was so happy to be able to finish the last days of my pregnancy safely and calmly. 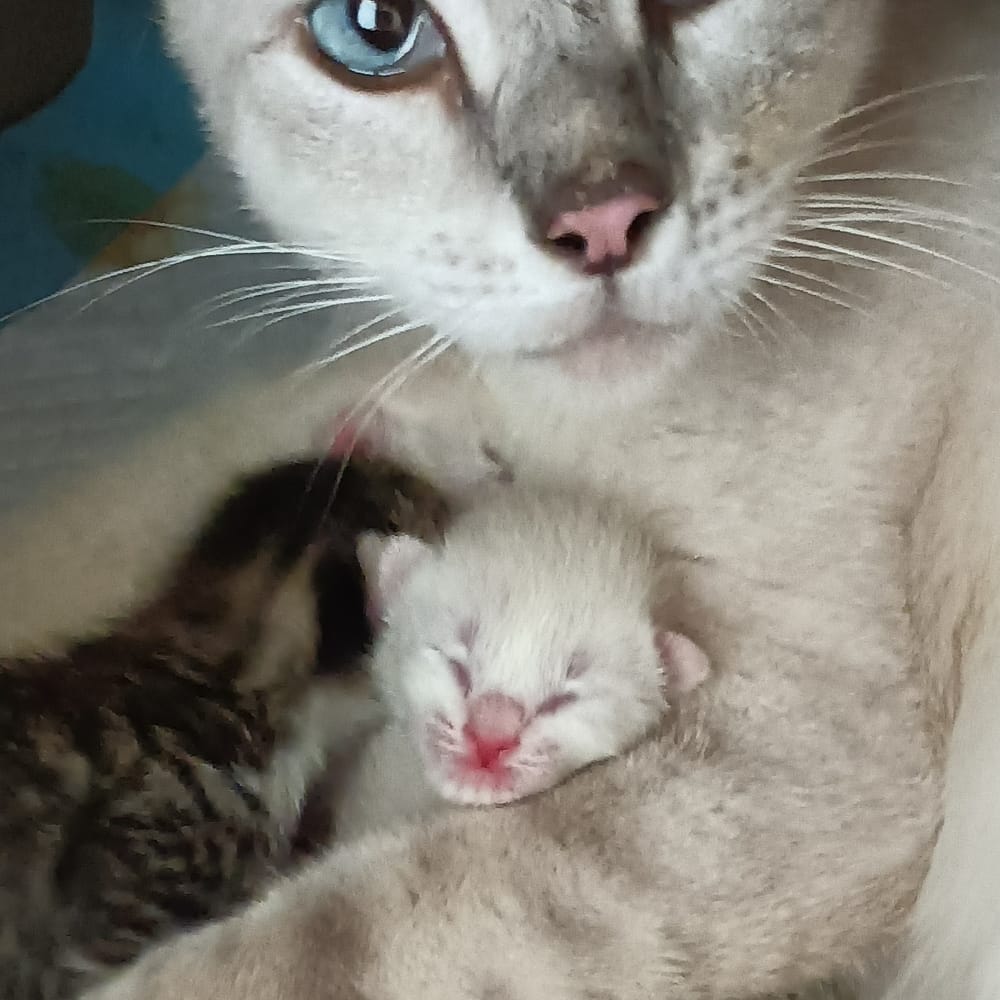 My babies are coming!

After ten days in my new home, I realized that my babies would be born soon. I first called the human. He immediately entered my room, saw that it was time. He helped me prepare my nest.

I wanted him to stay with me in these moments of greatest joy and at the same time of greatest vulnerability, but he left a few times and I kept calling him until he was back with me.

He stayed by my side the whole time, helped to clean up my newborn babies when I was too tired. Finally, after 7 hours, all six babies had found their way. I was so proud and happy!

After a day I realized that the last born would not make it. He too felt it and kept himself apart from his siblings. Not long after, he died peacefully. The human was very sad and took him away. But I had to focus on my five living babies.

After a week I felt severe pain and itching on my cheek. I was scratching it, it split open and a serious abscess became visible. My human immediately took me to a vet who said I had to have two teeth removed, but not while I was feeding my babies. She gave me an injection and told my human how to clean my wound. It got a little better, but was not really healing.

My babies are dying!

A few days later, one of my babies got weak and stopped drinking. I couldn't help him so I focused on my other babies. my human realized the problem, took the baby to the vet. She told him to bottle feed my baby. He tried everything but not long after the second feeding my baby died. My human was so sad! The next day another baby went weak, my human noticed it and went to another vet. Feeding. It didn't help, the same night he died. The next day, my human went with me and my three babies to another vet.
She said my teeth don't have to be removed, just proper antibiotic treatment. She also tested me carefully.

The first test showed that I am FIV positive. FIV is like HIV in humans, but it only affects cats. I most likely received it from the father of my babies.
My human was devastated. He already had three beautiful cats and now it was impossible to introduce them to me or my babies, because we could easily infect them too. Also, it would be very difficult to find someone to adopt us, because we can't be with other healthy cats, we can't go out.

My babies are "special"

Plus my babies all have mild disabilities. it happened due to my contaminated milk during the abscess. After receiving the new antibiotics, within days all the babies were much better. The largest one only has a little thing with the eyes, one looks up, the other down: 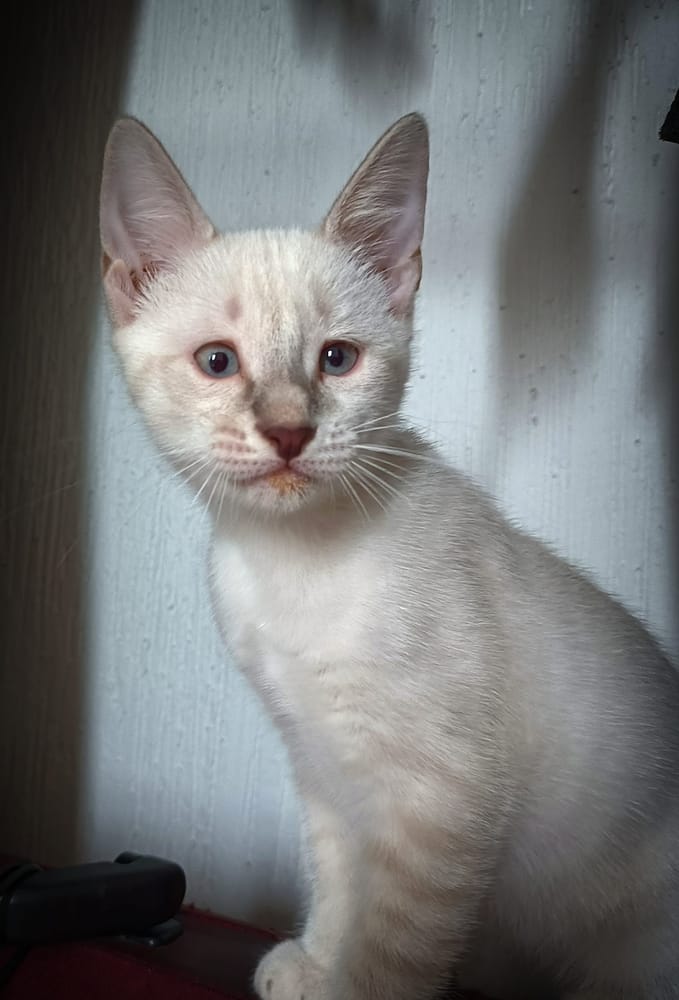 The middle one had lame hind legs, but after treatment he started walking! Only when he sits can you still see that his legs are different.

The smallest of my babies had no eyeballs at first. After the treatment they began to develop, a week later he opened one eye and a few days later the second. But they are not fully developed, you can see shadows, but not perfectly. However, she is lively, plays with her brother and sister, climbs and jumps.

My babies couldn't get tested on the same day as me because they were too young to take a blood sample. Two weeks later they were ready. The test brought out what we had feared, they are also FIV positive.

looking for a home

My human has been looking for someone who can take care of us ever since. We can have 10 years or more with the disease. A simple injection a month to strengthen our immune system will help a lot.
We could live together as a family, giving a lot of love and joy to the person who will take care of us.

But time is running out

My babies are already quite big, they are 10 weeks old. Our human couldn´t let us walk around his house because of the risk to his other cats. Every day the room we lived in felt smaller.
He decided to make one last attempt to find a home, if he doesn't do it in the next 5 days, he'll have to let the vet come and give us a lethal injection. I knew he doesn't want to, we have a strong bond. He also loves my babies very much and so do they.

But it's gotten to a point where keeping us in this little room is becoming torture. In addition, there is always the risk that we will somehow come into contact with the other cats and one scratch is already too much.

The evening before the vet was about to come to put as asleep, my human was sitting with us, very sad, explaining me again, why he has to do that. He was spoinling us with tuna, brushing me, playing with my babies. Then he received a message on his phone. And everything changed! An Animal sanctuary in Cancun had agreed to take us in, they have an area for FIV positive cats!

The next day he brought us first to the vet to get vaccinated. Then he brought us to the sanctuary. The driving was very scary, we were shivering in fear and stress.

At the sanctuary a guy showed him were the other cats are, we went inside and the guy just opened the transport box.

We went out, many other cats were looking at us and sniffing, but not aggressive. I looked around, saw a hiding place and went there immediately for cover. My babies werw surprised by the many other cats and started making contact.

The guy was pushing my human to leave.

Financial situation of the sanctuary

The place for the FIV positive cats is large enough for that amount of cats, but it could be staffed much better with climbing- and hiding options, toys, pillows and blankets, feeding options.

The sanctuary is depending entirely on donations and they are home for many different animals with often terrible history.

I want to support them taking care of the cats in the best possible way. It´s a horror cabinet of abandoned and mistreated creatures, that found there a place to live somehow in dignity.

Also I will have to sterilize Maria and her babies, 900 pesos for each female and 500 for the male. The little one with the eye problems needs to get his right eye removed. It is wet, not functioning and will be a permanent risk of inflamation. The surgery should be done together with the sterilization and will be another 1000 pesos on top.

How you can help

Donate as much as you can afford on my PayPal with the reference "Help Maria".

I will publish here every month how much was donated and what it was used for.

Use the "Donate" button below for your donation:

If you have further questions, feel free to contact me